I first tasted kombucha (kom-boo-cha) tea at a dear friend’s house in Goshen, Indiana, a regular stopover on our Winnipeg – Syracuse jaunt. Our host possesses the kind of leisurely effervescence that makes our time together always feel too short. Last August while standing in her kitchen listening to the rain that had diligently journeyed with us across the Midwest, she burst in suddenly to ask, “have you guys heard of kombucha?”

I had, but as is common with me, promptly forgotten about it. Maybe it had seemed like health store hype. But after lifting a glass of my friend’s brew to my lips and letting it fizz and bubble down my throat like an earthy hybrid of tea, beer and champagne, I was sure never to forget it again. But not without a brief moment of doubt:

It took me about eight months to find a suitable “mother” or SCOBY (Symbiotic Colony of Bacteria and Yeast). I could have purchased one online, but like a sourdough starter or friendship bread, buying locally seemed part of the whole experience. I knew that if I was patient, someone in the Syracuse community would come through.

Yesterday I brought my baby home and left 6 liters of water to de-chlorinate for 24 hours (it evaporates off). Today I started the process of culturing my first, well, anything. Cultured as I may be, now I’ve got nothing on the kombucha fermenting away in my living room.

With some help from Wikipedia, I’ve patched together a briefer on kombucha for all parties: interested, incredulous, or somewhere in between. Kombucha works in a similar way to the old world process of making vinegar: sweetened tea is fermented by a solid mass of microorganisms called a “colony.”

The drink dates back to 250 BC China, where it was named the “Immortal Health Elixir,” for its ability to balance the spleen and stomach and aid in digestion. News of the beverage eventually reached Russia and Eastern Europe as tea became affordable for the average Joe (or Fyodor). The process of brewing kombucha was introduced in Russia and Ukraine at the end of the 1800s and became popular in the early 1900s. The kombucha culture is known locally as chayniy grib, and the drink itself is referred to as “tea kvass” or simply “kvass.”

I’ll keep the updates coming, but for now here’s the basic procedure:

1. De-cholrinate 6 liters of water by letting it sit for 12 hours.

2. Using 2 litres (8 cups) of your de-chlorinated water, make a strong, sweet tea: Boil water, then add 1/3 cup of black (fruit-flavored works well) and green loose tea. I usually throw in some dried hibiscus as well, for a nice rose tint. You can also steep dried berries in with the tea mixture. Experiment!  Stir in between 2.5 – 3 cups of white sugar (don’t use any other sweetener!) and stir until sugar is dissolved. Let the tea steep for 30 minutes.

3. Strain the strong tea into the rest of the de-cholrinated water (shown above).

4. Set the SCOBY safely aside in a bath of already fermented tea (shown above).

6. Gently, and always with clean hands, place the SCOBY into the jar of fresh tea. Pour already-fermented kombucha into the jar (you’ll need about 10% of the final amount to be this “starter.”)

7. The SCOBY mother will either sink or rise, either is OK.

8. Cover with fine cheesecloth and set aside in location with good air-flow and medium light (no direct sunlight or dark closets).

9. Wait 2-3 weeks. Depending on the ambient temperature, the tea will ferment at different paces. Test the PH levels (most people like a tea of between 2.8-3 acidity) or scoop some out and taste to your liking. As time goes by, the PH will fall and the mixture will get more acidic and less sweet.

10. Repeat the process, saving some fermented tea to use as a starter in the next batch.

The Happy Herbalist, though not a well designed site, offers some really useful tips

A thorough article on the drink

He wrote the book

The New Homemaker likes it too

Taste before you culture

It’s not that I expected bunnies and tulips on the first day of spring, but snow? How horribly anticlimactic. The vernal equinox rode in on roaring winds today, with just a tease of sunshine dueling for a hold over the late afternoon. In an attempt to counter the dismal reality of a persistent winter, we gathered up some friends and sought hot food from climates far more vernal than our own.

A generous Canadian friend treated us to Lao Village, a restaurant we’ve heard nothing but raves about. This diminutive downtown Laotian and Thai restaurant exceeded our expectations. I immediately noticed the simple and cheery presentation. I know that good food can redeem even styrofoam, but I am quickly won over by good food beautifully accessorized. That’s why going out to eat is so special. Not only should it (hopefully) be food you’d struggle to make as good at home, but it should tug your aesthetic heartstrings a little as well.

Mark’s “I don’t know, something with chicken,” firepit-hot Thai something or other

The vegetables, as we had heard, were fresh, bright and crisp. Each dish had a distinct assortment of textures and spice. The rice was plentiful, helping to counter the tongue-tearing heat of some of the dishes. I had the Massaman Seafood Curry, on the recommendation of my little bro who is traveling in Southeast Asia. The cuisine seemed authentic, adorned with fresh basil, lime leaves and sliced chilies. But what do we know?

Service is friendly and very accommodating, and it’s such an obvious pick over the Subway next door I wonder how the sandwich franchise stays in business. Dinner entrees are between $6.95 and $11.95. If you live in the Syracuse area, be sure to check out this local gem. They offer lunch, take-out and dinner service.

Before I begin, I must say thank you to all my readers for 1000 hits. You inspire me.

China Road has been on my list of nearby eateries to try since I’ve been living in Syracuse. On International Hallmark Appreciation day last Thursday (aka Valentines), the husband carted me out to Mattydale to sample some fine Szechuan fish heads. Or one anyway. 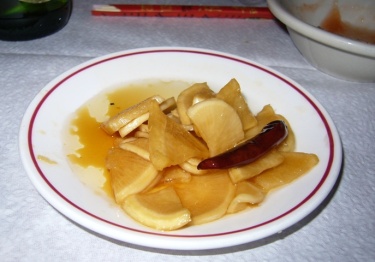 We start with these spicy marinated radishes, fried wantons with sweet sauce for dipping, and tea. You would’ve thought they didn’t want us to order any more food!

After sharing a bowl of hot and sour seafood soup and some pillowy soft Szechuan dumplings, the Sea Bass arrives, cloaked in breading and still steaming from its hot oil bath. All around it lay the makings of a perfect Chinese meal — swollen garlic cloves, shitake mushrooms and scallions, suspended in a thick brown pool. I have a staring contest with the fish, and he wins. He lets me win when he realizes I hold the knife. 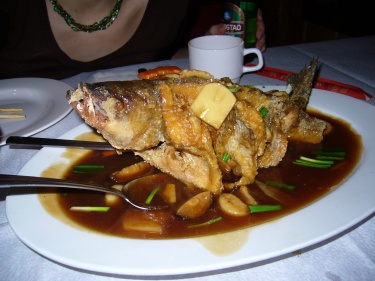 The Sea Bass behaves very well for a series of close-ups, hardly complaining about it being his bad side.

The snow pea shoots (recommended by our server) were probably the only dish to grace our table that were even half deserving of low cholesterol status.

China Road is a great place to try breaking away from chicken balls and fried rice. Their authentic Chinese menu allows diners to choose between the standard American-Chinese fare and the stuff the owners are really proud of. It was apparent that others thought so too, as there wasn’t an open table in the house.

Error: Twitter did not respond. Please wait a few minutes and refresh this page.